For 8 years the idea with all its mathematics behind was stored in a drawer, now Engelbert Schmid has realized it: The new bell measure

The difference compared to the well known, proven and wonderfully easy and free playing "golden cut" (= medium) measure is minimal. But this is exactly what some horn players were seeking for. The detachable flare is the same at “golden cut” and “kompakt”. But deriving from the bell tail this "kompakt" measure gets an earlier edge into the sound, is a little more concentrated and more compact, meeting the desires of part of the hornplayers.

Although this bell is narrower, for many ears the sound seems to be darker and has the "something", which some players are seeking for.

The "kompakt" measure provides some resistance, which has nothing to do with accoustical errors and is very even over the entire range. For those who love such a positive resistance, its like a wall which you can lean at, and which gives you security.

The "kompakt" doublehorn is the success promising "work horse" for the orchestral player, reliable and fitting perfectly into the environment of the present style of German horn sound, which is copied in many areas allover the world.

In order to be able to distinguish the "kompakt" from the medium (= "golden cut"), we designed gold plated valve caps for this measure. 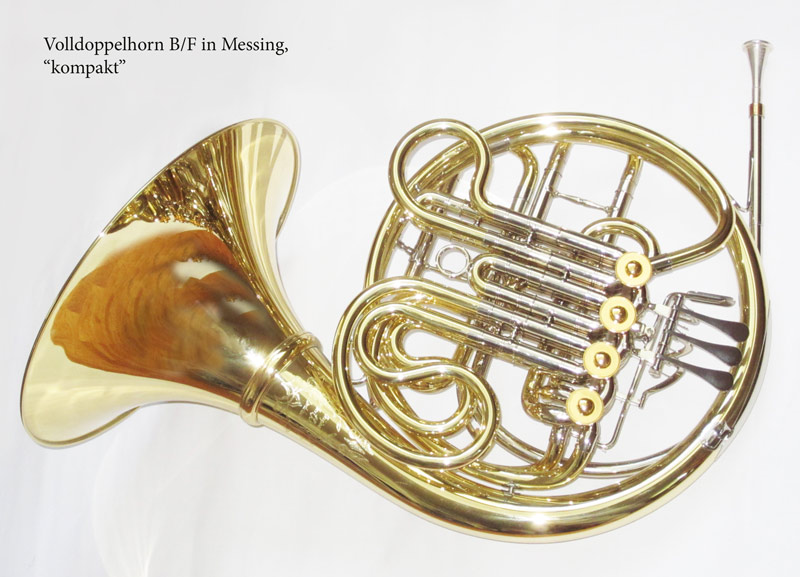 And the legendary advantages of Engelbert Schmid Horns are remaining, like the uniquely thought up intonation, the smooth slurs, the B-natural feature and and and.

Of course the “kompakt” version can be ordered for all kinds of horn models like triples and double descants, and may be combined with whatever detachable bell flare.